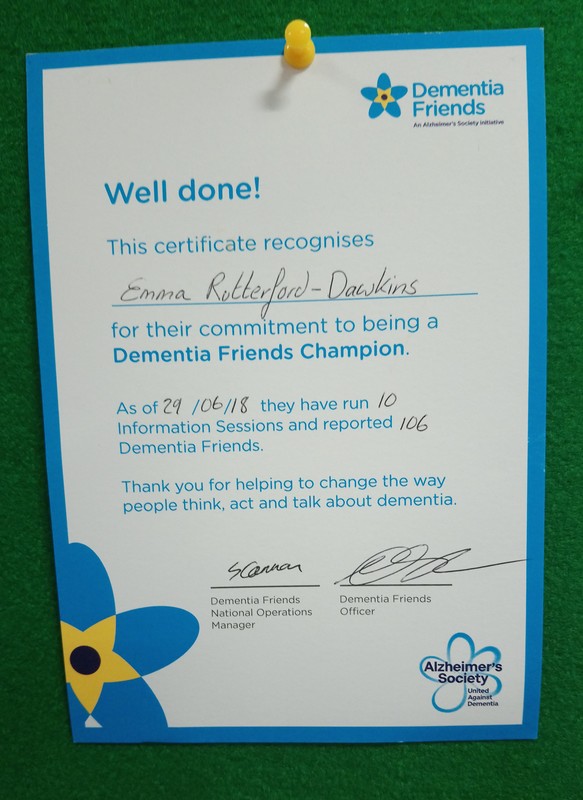 Beech Tree’s Dementia Friends population is growing rapidly! A nice little certificate received from the Alzheimers society to thank us for our commitment of spreading awareness about dementia.

Since receiving this we have actually increased to having a total of 127 Dementia Friends at Beech Tree.

In the past 12 months Beech Tree has included Dementia Awareness as part of its mandatory induction. All staff are taught what dementia is, the effects it has on those living with it, the impact it has on others, and most importantly what they can do to help. At the end of the session they have the offer of becoming a Dementia Friend which they become incredibly enthusiastic about.

Beech Tree suggested that it would be a good idea for staff to wear their badges on their lanyards. This as a result has been helpful in sparking conversation. With people asking: “what is that badge for?” And beginning the common conversation of I know someone with dementia…

We have also had one of our carers nominated for the Dementia carer award at the Kent intergrated Carer Awards this year. The results for this are due in September.

Beech Tree has also been nominated for The Dementia Friendly Awards – Organisation of the year 2018. Results to be announced very soon!

Our staff have had such a positive impact upon people who are living with dementia and those who are close to them. Staff have engaged with individuals with a greater level of understanding; developing their care skills to a new level. There communication, competence and confidence with the condition has greatly increased. Staff have also felt comfortable to spread their knowledge with client’s loved ones; consequently making things clearer and potentially easier for them to deal with.